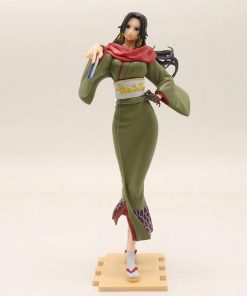 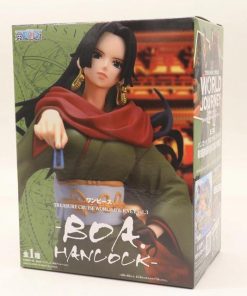 < h2>Young pirate, the time has come for you to get this One Piece Boa Hancock Kimono Figure.

Pirate Empress Boa Hancock is the Snake Princess of Amazon Lily who rules the Kuja tribe with the help of her two Gorgon sisters, Boa Marigold and Boa Sandersonia. She is also the current captain of The Kuja Pirate Crew. Boa Hancock was the only female member of the 7 Corsair Captains until that group disbanded. She was first mentioned by the Risky Brothers at the end of the Thriller Bark arc when they compared her legendary beauty to that of mermaids.

She is considered by many to be the most beautiful woman in the world, especially due to her Demon Fruit which makes almost everyone who looks at her fall in love with her.

While she currently remains employed with the 7 Corsair Captains, her love for Monkey D. Luffy has caused her to turn against the World Government on numerous occasions, putting her status as a Corsair Captain at risk. By the way, the straw hat Luffy figurine is right up your alley.

So, won over by the pretty Boa Hancock figurine? If so, wait no longer and join her on her island of Amazon Lily.< /h3>

Whether you’re a die-hard fan or a fine collector, these items are bound to be for you. Perfect for giving, decorating or even collecting, these items will expand your One Piece universe. So, don’t wait any longer and jump on the opportunity to live many more thrilling adventures in the Luffy universe.