Big Mom’s Crew Jolly Roger is a skull with thick red lips, wearing a pirate tricorn, on a fluffy background (which may represent Big Mom’s hair) with several candy canes sticking up behind it instead of normal crossbones.

As for Big Mom’s Crew, they are an infamous and powerful pirate crew led by Emperor Charlotte Linlin, better known as “Big Mom.” The crew rules the powerful nation of Totto Land, with their captain ruling like a queen and their base of operations located on the island of Tougato. By the way, if this crew doesn’t suit you, change your emblem and opt for the Hundred Beast Crew flag.

So, won over by the Big Mom Crew flag? Would you like to be a part of this infamous pirate crew? If so, welcome aboard!

Whether you’re an early fan or a fine collector, look no further. Here you’ll find all the mythical items that refer to your favorite manga. These items will expand your One Piece universe without a doubt. So don’t wait any longer and grab this opportunity to have many more exciting adventures. 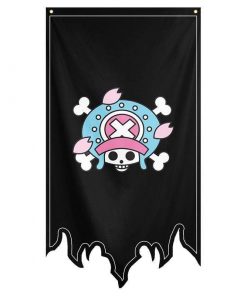 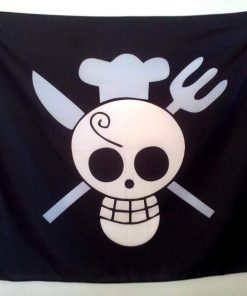