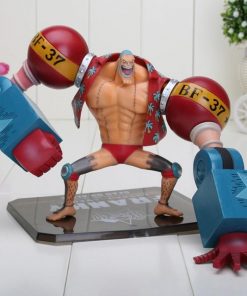 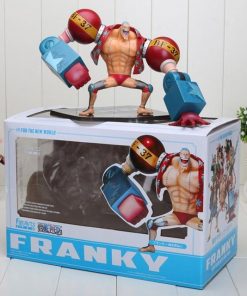 Young pirate, the time has come for you to get this One Piece Dead or Alive Franky New World Action Figure.

As a reminder, Franky, whose real name is Cutty Flam, is the carpenter of The Straw Hat Crew. Franky is a cyborg recruited to Water Seven and was introduced in the story as the leader of the Franky Family, a group of shipbreakers. He is also the first cyborg introduced in the series.

At the request of the Franky Family, Franky will join The Straw Hat Crew to fulfill his dream. Regarding his bonus, it was 44,000,000 Berry before the ellipse, this now reaches 94,000,000 after the events in Dressrosa. By the way, if you want to expand your figurine collection, the Nami Wanted figurine is at your fingertips.

So, conquered by Franky’s “Dead or Alive” figurine? If so, don’t hesitate any longer and jump at the chance to become a full-fledged member of the Straw Hat Crew.

Whether you’re a die-hard fan or a fine collector, these items are bound to be for you. Perfect for gifting, decorating or collecting, these items will expand your One Piece universe. Young pirate, take your destiny into your own hands and have many adventures aboard the Thousand Sunny.