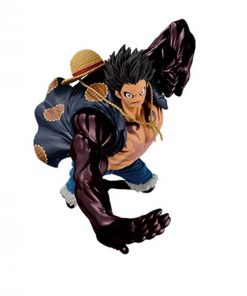 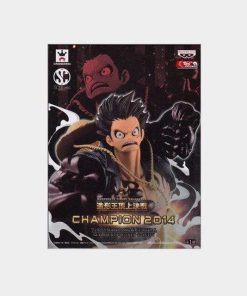 Young pirate, the time has come for you to get this One Piece Luffy Gear Fourth Kong Man Figure.

Here’s what you need to know about it; Gear Fourth is the name of a fighting technique of Monkey D. Luffy that first appears in the latter’s fight against Doflamingo. This technique was developed by Luffy during his training on Rusukaina.

As for Gum Gum Kong Gun, which literally means “Gorilla Blow”; this is the first technique Luffy uses in Gear Fourth against Doflamingo. By compressing his fist back into his enlarged forearm, Luffy is able to unleash a devastating blow, breaking Doflamingo’s defense and sending him flying. By the way, if you’re looking to expand your action figure collection, the Doflamingo Figure is right up your alley.

So, won over by Luffy’s action figure and his Gear Fourth Gum Gum Kong Gun fighting technique? If so, don’t hesitate any longer and join him in all his fights.

Whether you’re an early fan or a fine collector, look no further, these items are bound to be made for you. Perfect for gifting, decorating or collecting, these items will complete your One Piece universe. There’s only one thing left for you to do young pirate, take your destiny into your own hands and continue to live many more exciting adventures than the last!

One Piece Luffy Next King Of Pirates Action Figure OMN1111