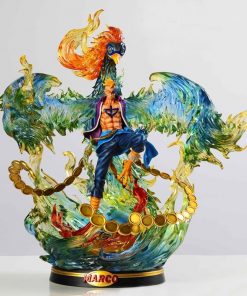 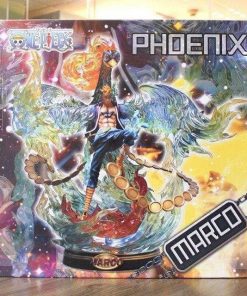 Young pirate, the time has come for you to get your hands on this One Piece Marco Mode Phoenix Figure.

As a reminder, The Tori Tori no Mi, Phoenix model, is a Mythical Zoan Demon Fruit eaten by Marco. Appearing for the first time during the Battle of Marineford, it allows him to transform into a Phoenix or a hybrid form. Getting back to Marco, here’s what you need to know about him; Marco, was the commander of the First Division of Whitebeard’s Crew.

He was also Whitebeard’s Yonko’s right-hand man as well as his closest confidant. Following the Retaliation War, Marco returned to Sphinx, the island of his late captain’s birth. He now acts as doctor and protector of the island’s inhabitants and Whitebeard’s crew members. By the way, if you want to expand your action figure collection, the Edward Newgate The Whitebeard Emperor action figure is right at your fingertips.

So, won over by Marco aka Marco the Phoenix? If so, join him on Sphinx and help him accomplish his mission.

One Piece is the best-selling manga in the world. Be proud to be a part of it and continue to claim your infatuation with this series. Whether you’re a fan of the first hour or a fine collector, these mythical items are bound to be made for you. So don’t wait any longer and jump at the chance to become a member of the straw hat crew. Your fate is in your hands, young pirate!